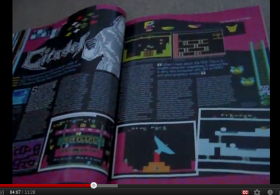 This month’s Retro Gamer (May/June 2012 #103) contains a four pager from yours truly. This time, the subject is the 1985 BBC Micro/Electron release Citadel. Like most games of the era, it might look a bit primitive by modern standards, but programmer Michael Jakobson squeezed every ounce of storage out of the old Beeb to deliver a colourful gameworld made up of 240 interlinked screens. It’s a wonderful example of a vintage arcade adventure, and it’s also a consummate BBC Micro game. One of the commenters on the forum remarked that when he first played it, the game seemed as big to him as Skyrim does now. This time I was able to get in touch with Michael Jakobson and also Simon Storr, the author of Citadel 2.

I was particularly happy with the layout as the guys managed to cram some decent sized screenshots into the mag to show off the (8 colour) graphics. The BBC Micro had a colour system that was based on primary colours giving it a very bright and distinctive look and Citadel is a fantastic example of that.

Some of the guys that I follow on YouTube have covered the game before. Steve Benway gave it a first impression look, and PsiMan did a more detailed retrospective on it as it was a favourite of his back in the day. There are some more gameplay vids to be found on YouTube and there is a nice video of Darren Jones, the editor of Retro Gamer flicking through the issue here. The article is being discussed on the StarDot (BBC Micro) forums, and the issue itself is being discussed on the RetroGamer forum. 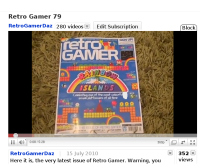 Issue 79 of Retro Gamer magazine contains my six page feature on Superior Software, the most prolific BBC Micro games company back in the 80s and 90s. The company is still in business today selling remakes of the classic back catalogue and can apparently even supply original copies of BBC Micro games.

I don’t have my copy yet but you can watch Darran, the editor of Retro Gamer flicking through the issue on Youtube. As you may know, this is my third feature for this magazine. If you read it, I hope you enjoy it, and I hope I’ve done justice to such a great company. There is a feedback thread for the issue on the RG website.

[Update: I’ve got it and it looks great. I forgot to add my name to the introduction and I’m not credited elsewhere, but I did write it, I promise!]

Thanks are due to Richard Hanson, Peter Irvin, Tony Oakden and Gary Partis for allowing me to interview them.